Depending on where you live, tap water or well water may be contaminated with metals, bacteria, and other chemicals, so you would want to purify the water before drinking it.

In this post, we’ll go through two very common methods of water purification and their pros and cons and examine reverse osmosis vs distilled water to see which is better.

Reverse osmosis and distilled water are two different ways of purifying water at home. Both use very different principles to work, and they have slightly varied results, though not necessarily superior than the other in all aspects.

The truth is that they’re both effective and and it boils down(pun intended) to a matter of choice.

How does reverse osmosis work?

The water crosses a semi permeable membrane which lets water molecules through but not the impurities.

Osmosis naturally works when there is a lesser and greater concentration and a membrane in between. This is because of the natural movement of molecules – it always happens.

Since this is against the natural movement of water, reverse osmosis systems use pressure to force the water through the membrane.

What does reverse osmosis remove?

Reverse osmosis is quite effective. It removes most heavy metals such as copper, magnesium, and sodium. It also removes fluoride added by municipalities. Pathogens and viruses are also removed, though not always completely.

Most reverse osmosis systems have a sediment filter which removes large particles, and a carbon filter that removes organic compounds like pesticides. Many systems also have a remineralization stage where beneficial minerals are added back into the water. This stage is also called an alkalization stage.

The end result is relatively pure drinking water that you can get on demand, usually through a tap in under-sink or countertop reverse osmosis systems.

Reverse osmosis does generate a lot of waste water, though. Most systems waste 3 gallons of water for every gallon of water they purify. 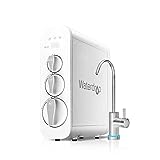 How does distillation work?

Distillation is a chemical process that tries to mimic the natural water cycle on planet Earth. On Earth, solar radiation causes water from oceans, lakes, and other water bodies to evaporate. The water evaporates, rises, condenses in the cooler upper regions of the atmosphere, and falls again as rain.

You can think of distillation as a little boiler. As the water boils, it turns into water vapor, rises up, condenses again into a condensation chamber and then goes to your water supply.

When you boil the water, the contaminants don’t turn into gas – only the water molecules do, so whatever goes into the condensation chamber is very pure drinking water.

One disadvantage of distillation is that you can’t get water on demand. You’d have to have a tank full of distilled water which you can pour drinking water from. Since this is a process, it has to take its time to complete.

Reverse osmosis can push water across the membrane on demand.

What does distillation remove

Distillation removes slightly more impurities than reverse osmosis, though not necessarily significantly more. One difference between the two, however, is that distillation is not very effective at removing chemicals that have a low boiling point.

By lower boiling points, we mean close to 100 degrees Celcius. Such chemicals will also evaporate with the water and condense again. There are not many such chemicals, though chloramines, which are added by many municipalities, are one example.

Chloramines in themselves are not harmful, but some people may choose to remove them from the water before consumption.

On the flip side, an advantage of distillation vs reverse osmosis is that you won’t have to boil distilled water since it is already boiled.

The pH of distilled water is pretty close to 7. Once it exits the distillation process, though, water will inevitably absorb some carbon dioxide from the atmosphere which will lower the pH to around 6.0.

Generally speaking, you can expect the following to be removed with distillation and reverse osmosis: 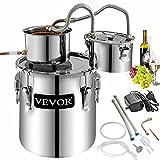 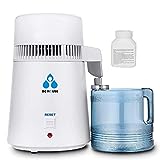 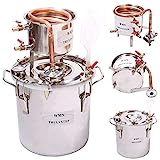 There is a common misconception amongst some folks that drinking water that contains magnesium and calcium contributes to your daily mineral intake, and some people go as far to think that drinking mineral depleted water can suck or leech the minerals out of your body.

This is biologically not possible. The only way minerals could get sucked out is if there was greater osmotic pressure pressure inside the cells in your body than outside. For this to happen, the cells would have to be submerged in purer water than the water inside the cells.

However, once you drink water, it no longer remains “pure”, so to speak – it immediately mixes up with the rest of your stomach’s contents and even as it passes through your body, there is no point where water is “pure water” – it’s always mixed with something else.

You should focus on eating a balanced diet containing lots of vegetables and fruits to make sure you’re getting all the minerals you need.

Hard water contains magnesium and calcium salts – this causes the water to be slightly alkaline. In case your plants prefer acidic conditions, you may wish to use RO or distilled water instead, since the pH of RO water and distilled water is much closer to 7.0.

With neutral water, you can then control the pH by adding as much acid or base as you need.

The same goes if you have a wide diversity of plants. By using reverse osmosis or distilled water, it’s like getting rainwater from your tap!

If you’re growing hydroponically, then distilled or reverse osmosis water is a huge plus, since the roots are directly in contact with the water at all times. However, be sure to add some extra calcium or magnesium to supplement the bits you lose.

In this case, it’s a pros vs cons analysis. The con is you’re losing magnesium and calcium(that plants do require), but the pro is that you’re removing all other contaminants. You can simply add back whatever calcium and magnesium that you need.

A slight difference in conditions can be devastating for your tank inhabitants so you have to be very careful with what you put in.

The natural habitat for most fish is NOT pure distilled water. Most water contains minerals and other particles, so if you put your fish in 100% pure distilled water(or even pure RO water), the salts in their blood will diffuse out into the water and you’ll have a lot of dead fish on your hands.

High quality tap water can be used as-is, as long as you know what’s in it and you’ve sufficiently tested it. You’ll need to make sure there is no chlorine, as that is unsuitable for life.

If however you don’t have access to good tap water or you wish to be in complete control of exactly what is going in the water, then you can indeed use a distiller or RO system to get your initial water, and then add salts and other chemicals as you need.

As you can see, both reverse osmosis and distillation have distinct advantages and disadvantages. Reverse osmosis is very effective at removing impurities and producing good quality drinking water, but it wastes a lot of water in the process.

Distillation is also quite effective at removing many impurities, but it misses out on chloramines as their boiling point is very close to that of water. Additionally, a home distillation system requires power to run, whereas reverse osmosis systems run on water pressure alone.